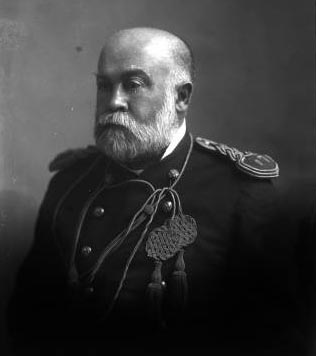 Charles Braden (left) died on January 15, 1919, in Highland Falls, New York, and was buried at the U.S. Military Academy Post Cemetery. He was an 1869 graduate of the Academy who married Jeanette Devin, the daughter of General Thomas Casimer Devin, who was said to be one of the best and most effective Union commanders in the Civil War. Braden was not present at the Battle of the Little Bighorn due to wounds suffered during an Indian attack on his camp on the Yellowstone River on August 11, 1873. He was granted a leave of absence on March 13, 1874, until he retired due to disability on June 28, 1878.

Other Seventh Cavalry anniversaries this week include:

Fremont Kipp died in Washington, D.C., on January 16, 1938, and was buried there in the U.S. Soldiers’ Home National Cemetery.

Young Hawk died on January 16, 1915, in Elbowoods, North Dakota, and was buried in the Indian Scout Cemetery in McLean County, North Dakota.

Francis Hegner died in Kenockee Township, Michigan, on January 17, 1891. He was on detached service during the battle, so he was not present.

Francis Marion Gibson died on January 17, 1919, in New York City and was buried at Arlington National Cemetery. He was the brother-in-law of Donald McIntosh.

Joseph Carroll was born in New York, New York, on January 19, 1847. He was a member of the band, so he was not present at the battle.

John E. Hammon died on January 19, 1909, in Sturgis, South Dakota, and was buried there in the Bear Butte Cemetery. He was a Corporal in Company G and was in the hilltop and valley fights.

Henry Harrison Davis was born on January 20, 1846, in Bellvernon, Virginia. He was a Private in Company M and was in the hilltop and valley fights. He died around 1905.

August B. Siefert died on January 20, 1921, in Highland Park, Illinois, and was buried in the Fort Sheridan Cemetery in Highwood, Illinois. He was with Company K during the hilltop fight.

Stephen Cowley was married in County Mayo, Ireland, to Bridget Agnes Moore on January 21, 1871. He was on detached service at Yellowstone Depot, so he was not present at the battle.

Joseph Kneubuhler died on January 21, 1917, in San Diego, California.  He was a member of the band, so he was not present at the battle.

Christian C. Boisen died in Fort Smith, Arkansas, on January 21, 1923, and was buried at the National Cemetery there. He was a Private in Company K who was in the hilltop fight.