Henry James Nowlan was born on June 18, 1837, on the Corfu Ionian Islands. He was a First Lieutenant with the Quartermaster who was not present at the battle due to detached service.

Ferdinand Klawitter was born in Conitz, Berlin, Germany, on June 19, 1836. He was a Private with Company B who was not present due to detached service. 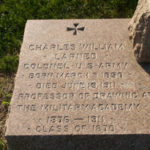 Charles William Larned died on June 19, 1911, in Danville, New York, and was buried in the United States Military Academy Post Cemetery at West Point, New York. He was a Second Lieutenant with Company F who was not present at the battle due to detached service.

Charles Albert Varnum was born in Troy, New York, on June 21, 1849. He was a Second Lieutenant in Company A who commanded the scouts. He participated in the valley and hilltop fights and was wounded.

Luther Rector Hare married Virginia Hancock on June 21, 1878. He was a Second Lieutenant with Company K who participated in the valley and hilltop fights.

Frank K. Lombard died in San Diego, California, on June 21, 1917. His burial location remains unknown. He was a Private with the Band and was not present at the battle.

Frederick William Benteen (left) died on June 22, 1898, in Atlanta, Georgia. He was originally buried in the Westview Cemetery in Atlanta and was reinterred in Arlington National Cemetery in November 1902. He was the Captain of Company H who commanded a battalion during the battle. He led a scouting party and was wounded during the hilltop fight.

Charles H. Welch died in LaSalle, Colorado, on June 22, 1915, and was buried in the Evans Cemetery in Evans, Colorado. He was a Private in Company D who participated in the hilltop fight. He was awarded the Medal of Honor for his actions during the battle.

Carl August Bruns was born on June 23, 1830, in Brunswick, Germany. He was a Private with Company E who was not present at the battle due to detached service.

John Brightfield was born in Dearborn County, Indiana, on June 23, 1853. He was a Private with Company C who was killed with Custer’s Column.

Fred Stressinger was born on June 24, 1852, in Ripley County, Indiana. He was a Corporal in Company M who was killed in the valley fight.