Bates, Also Known As Murphy, Has Three Graves in Sturgis

The geography now South Dakota, in 1874, was an empty, blank space on the maps. The highway into this unknown territory was the Missouri River. The post Civil War U.S. Army had troops in camps along the river. Fort Union was one of the major Army forts and was walled with “drive up” windows and a room for trading furs with the Indians. Security dictated Indians not be in direct contact with troops and families inside the fort. The fort in 1874 was commanded by General William Hazen, George Armstrong Custer’s nemesis clear back to West Point when Captain Hazen ordered Custer court-martialed. The fort was where the Yellowstone and Missouri rivers join and run south together.

Southwest of present South Dakota, the Army bought a trading post that became Fort Laramie. Its mission was to supply, rest, repair, and protect the thousands of wagons and people traveling on the Oregon and Mormon Trail. Population in the United States was exploding and everyone with influence in the Territory wanted the Army involved in protection from Indians.

President U.S. Grant’s administration in 1868, by agreement with Red Cloud, abandoned army camps protecting the Bozeman trail to gold fields in Helena, Montana. The treaty agreed buffalo could be harvested by the Indians for seven future generations. (1)

A series of treaties with Indian bands was needed to allow railroads, telegraph lines, roads, and trails to gold rushes to California and Montana, and to the coal mining needed to supply the Transcontinental Railroad and homesteaders moving West up to the 100th meridian. People were moving into blank spots on the map seeking the dream of owning land. What was later labeled “The Great American Desert“, after a generation of starvation, was just on the west side of the Missouri River.

General Phil Sheridan was the driving force behind organizing a massive expedition into this territory in western South Dakota, explore and prepare a map and report on the country around Bear Butte. Sheridan was anxious to have a military post to control the Indians who were not agreeing to go onto a reservation. (2) Crazy Horse was one of those leaders who would not quit the freedom he had always lived.

Sheridan sold President Grant on letting him use the 7th Calvary, stationed at Fort Abraham Lincoln at present day Mandan, North Dakota, for the exploration. Across the river at Bismarck was the end of the rail and telegraph lines. Sheridan had the option to use the railroad and Fort Laramie troops but he did not want to stir up the Indians in the area from Fort Laramie to the Black Hills. There were reporters from Chicago and New York on the trip and many other population centers.

The 1874 exploration in the wilderness is memorialized in modern maps of South Dakota. There are over forty-nine map locations: Ludlow, SD (Chief Engineer on the trip); Tilford, SD (Commander of Fort Rice and head of infantry on the trip), Custer peak, and even “Turk head” rock (after one of the hunting hounds the General brought along) because of the exploration.

Scott Nelson, Pierre, SD (3), is making a serious effort to find and photograph the grave sites of members of the 7th Calvary buried in South Dakota. Many were on the 1874 exploration and others enlisted after the trip and were in the Battle of the Little Bighorn in June 1876. Some served in building Fort Meade in 1877. The army base was located by Sheridan when public pressure arose from the massive numbers of people seeking fortune in the Black Hills due to the reports of gold from the 1874 expedition.

Locating the graves of the 7th Calvary veterans in South Dakota is a challenge. Joseph Bates is an example. Soldiers of the time may or may not have used their given name and often used different names when they enlisted or re-enlisted.

On the east end of Sherman Street is Bear Butte Cemetery, so named because it has a magnificent view of near by Bear Butte, which has a gravestone purchased by the G.A.R. marked Joseph Bates.(4) Also in the Bear Butte Cemetery is a smaller military marker (5) which reads Jno. Murphy inside the G.A.R. and on top of the gravestone is an attached silver plaque of about 3 inches by 4 inches engraved:

Ernest C. Gottschalk, 97, was the one who attached the metal plaque to the headstone. The inscription “ECG -97” stands for Ernest C. Gottschalk and 97 is the year he placed the plaque on the tombstone (1997). Before it was engraved by Gottschalk, the silver plaques were the standard marker used to identify grave sites before a headstone was placed in the cemetery. From 1986 Gottschalk, who lived at Vale, S.D., made a project of finding grave sites in many counties in the northwestern part of the state that were no longer marked. He kept records of the graves he found and re-marked them. He filed his findings with county offices in Lawrence, Meade, Butte, Harding, and Ziebach counties, which have booklets of information listing his findings by cemetery (6). 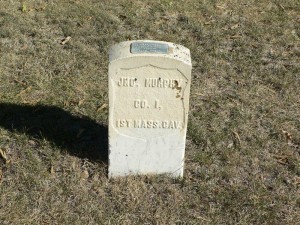 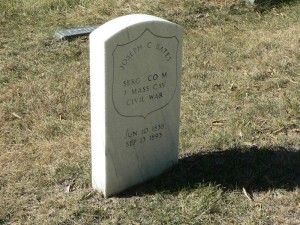 Ernie Gottschalk was given a Certificate of Recognition from the South Dakota State Historical Society Board of Trustees in December 1993 “for documenting burial sites.” These certificates are given out from time to time for meritorious acts in the history field.

Gottschalk depended heavily on pioneer papers of the area, most of which are only available on microfilm in local libraries. Gottschalk died in 1997.

On the west end of Sherman Street in Sturgis is the Catholic St. Aloysius cemetery. It’s about three miles straight west from Bear Butte cemetery. 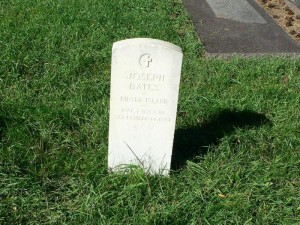 Joseph Bates has the only military marker in one section of the Catholic cemetery. He was a survivor of the Battle of the Little Bighorn valley and the hilltop fights.

“Joe Bates is dead. And the verdict of the coroner’s jury is ….he took Paris green with suicidal intent. No blame is attached to anybody, as Bates repeatedly said he was all right, and wouldn’t have a doctor. The coroner’s jury decided he died by his own hand.

Deceased served in M Troop, 7th cavalry, and was first sergeant for some time. He has been around Fort Meade ever since the post was established, and was a laborer or teamster in the quartermaster’s department for years. He had only one ear, having lost the other at Fort Lincoln…He was driving an ambulance when the team ran away and he fell under the vehicle, one wheel cutting the left ear off clean, but doing him no other harm. Bates was buried yesterday afternoon, and Calvin Duke post members, G.A.R. followed his remains to the grave.” (7)

Bates was born in Rhode Island and re-enlisted in 1870 at age 31 in Carlisle, Penna. He deserted in 1872, was apprehended in 1873, and joined Company M by Special Order issued by the Headquarters Department of Dakota in 1874. He is not listed as Bates on the 1874 trip into the Black Hills area but John Murphy is listed as a private in 17th U.S. Infantry (commanded by Major Lewis G Sanger) and 7th US Calvary(Commanded by 1st Lt. Donald McIntosh) (8)

Bates was 55 years old when he died. His military record shows when he was 40 years old the post surgeon certified Bates “as incapable of performing the duties of a soldier because the nearly 27 years that I have known this man he has been on Sick Report or in the hospital. Half the time for inebriation bordering on delirium…..He is useless as a soldier and unfit for that profession”

Bates service records listed him as Joseph C. Murphy in L, 1st Massachusetts Calvary in 1863 rising to the rank of 1st Sergeant. After the Civil war he re-enlisted as Joseph Bates and was assigned to the 7th Calvary.

He may have suffered from shell shock/combat fatigue. In those days alcohol or addiction to morphine was the only way soldiers could deal with this problem. Many soldiers were sent to insane asylums or committed suicide. Bates’ long military service and memories of action at Little Bighorn with Company M may have been too much for him. (9 & 10) He was discharged in 1877 after the post surgeon at Fort Rice, Dakota Territory, issued his report.

Civil War records say that John Murphy was a Captain in Company L of the 1st Massachusetts Calvary; his death is listed as September 11, 1893, and his headstone was supplied by the Vermont Marble Company for the Bear Butte Cemetery in Sturgis, S.D. (10)

This research is presented with the hope someone has information that will answer questions that still remain.

NOTES-
1. People who have not read the Treaty of 1868 still claim it says “so long as grass grows and water flows.” No agreement with Indians – or Treaty – during Presidents Grants eight year administration has any such language or guarantee.

4. Section 2, lot 43, Bear Butte Cemetery. The GAR was active in providing financial assistance to veterans with no family and no money.

6. Angela M. Ross, Meade County Register of Deeds, Sturgis, S.D. – E. Mail – mcrod@meadecounty.org – keeps on file in her office the material Gottschalk filed with Meade County by cemetery of graves he found and marked with these plaques. Ross reports Gottschalk filed with many counties information specific to the county where he filed the report. He also did some marking of graves in Wyoming. The legality of marking 300 graves and changing markings on headstones with aliases used by veterans, based on obituaries published, for over 10 years is an open question.

Jack McCulloh, Larry Owen, and Joe Sanders all of Rapid City started tracking as a hobby and a way of hiking in the Hills every week including skiing Terry Peak. the Custer Trail in the Black Hills with a GPS in 1994. After the publication of this research McCulloh started guiding groups to sites visited by the 1874 Exploration and conducting community education classes on the 1874 expedition.

Scott Nelson describes himself as a Custer buff.