On June 22, 1876, Lt. Colonel George Armstrong Custer confidently led his 7th Cavalry, several officers’ wives and assorted hangers-on out of Fort Abraham Lincoln near present-day Bismarck, North Dakota. With him was the regimental band, a sixteen-piece brass band mounted on matching white horses and led by Chief Musician Felix Vinatieri. They played “Boots and Saddles”, and then Custer’s favorite, the cheerful tune of “Garry Owen”, which would forever after be associated with the ill-fated 7th Cavalry and its demise. 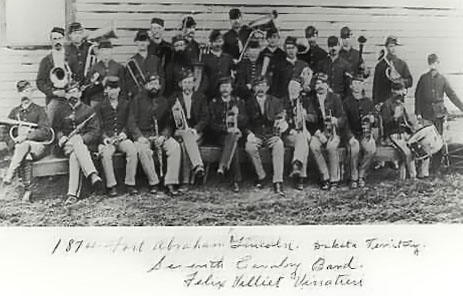 Custer’s only concern was that the wily Sioux would escape before he could engage them in battle, but his spirits were high, and the entourage took on the air of a summer pleasure outing. Hunting and scouting parties detached themselves occasionally to canter across the prairie.

When the party reached the confluence of the Powder and Yellowstone, General Terry’s orders were explicit: the band was to turn back. Custer, taking one bugler and the handsome white horses with him, rode into an ambush. The band arrived back at the fort – on foot – in time for the frontier Fourth of July celebration.

The place kicker for the New England Patriots football team at that time was a young man named Adam Vinatieri, the great-great-grandson of Felix. Adam’s talented toe not only drilled the game-winning field goal as time expired in the Big Game, but he kicked five game-winning field goals during the 2001 season to get them there, including three in overtime. According to Patriots’ statistics, Vinatieri is the most reliable field goal kicker in franchise history, connecting on 80% of his kicks. He scored 24 points during the 2001 post-season and is now the top Patriots scorer in post-season annals with 54 points. Not bad for a kid who couldn’t get drafted after graduation from South Dakota State University, even though he is the Jackrabbits’ all-time leading scorer!

What if Custer had defied his superior and taken the band to the Little Bighorn that blazing hot summer day in 1876?