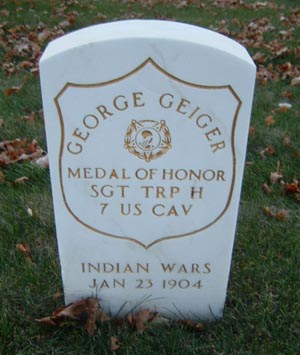 George H. Geiger was born in 1843 in Cincinnati, Ohio.  He was a Sergeant in Company H who participated in the hilltop fight. He showed extraordinary bravery when, along with Private Charles Windolph, Blacksmith Henry Mechlin, and Saddler Otto Voit, he risked his life to obtain water from the river for the wounded men, an act for which he was awarded the Medal of Honor. He died on January 23, 1904, in Dayton, Ohio, and was buried in the National Cemetery there.

Other Seventh Cavalry anniversaries this week include:

Left Hand, an Arikara Scount, was born in the Dakota Territory in 1829 and died on January 23, 1931. He was buried in the Saint Charles Catholic Cemetery in Saint Francis, South Dakota.

James Garland Sturgis was born on January 24, 1854, in Albuquerque, New Mexico. He was killed with Custer’s Column and, unlike most officers, was likely buried in the mass grave on Last Stand Hill.

James McNamara, who was a Private in Company H and participated in the hilltop fight, died in Pittsfield, Massachusetts, on January 24, 1932.

Otto Arndt was born on January 25, 1844, in Bavaria, Germany. He was not present at the battle due to detached service at the Power River Depot.

Edward Garlick, who was on furlough during the battle, died in Sturgis, South Dakota, on January 25, 1931, and was buried at the Bear Butte Cemetery there.

John H. Meier was born on January 26, 1846, in Hanover, Germany. He was a Private in Company M who was in the valley and hilltop fights, during which he was wounded.

Walter O. Taylor, a blacksmith with Company G who participated in the valley and hilltop fights, died in Rockland, Massachusetts, on January 26, 1931. He was buried in the Northville Cemetery in East Bridgewater, Massachusetts.

Edward H. Pickard was born on January 27, 1854, in Boston, Massachusetts, and died on January 30, 1928, in Portland, Oregon. He was with the pack train and in the hilltop fight.

Jacob Katzenmaier, who was not present during the battle, died in Fort Meade, Dakota Territory, on January 27, 1880, and was buried in the Old Post Cemetery there.

Wilson McConnell was born on January 28, 1839, in New Castle, Pennsylvania. He was a Private in Company K who participated in the hilltop fight.

William Thomas Craycroft was born in Springfield, Kentucky, on January 28, 1847. He was a First Lieutenant in Company B, but he was on detached service during the battle.